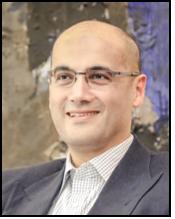 Mr. Shamieh is the Executive Chairman of Gen Re (a Berkshire Hathaway Company) responsible for Gen Re’s global reinsurance businesses.

Prior to joining Gen Re in 2018, Mr Shamieh held several senior executive positions at AIG, Inc. in New York, USA spanning eleven years (2007-2018), including as AIG’s first Corporate Chief Actuary (across life and non-life), AIG’s CEO Life, Health and Disability overseeing businesses in the U.S., Europe and Asia; and AIG’s CEO of the Legacy Segment.

Prior to joining AIG, Mr Shamieh was the first Chief Risk Officer of the Munich Re Group, in Germany (2003-2007). In this role he was responsible for the risk functions of Munich Re’s global reinsurance and primary businesses.

He holds a Bachelor of Economics degree from Macquarie University in New South Wales, Australia, and is a Fellow of The Institute of Actuaries of Australia.